One of the best ways to show off LED projects is wearable accessories. In the maker lab we used LED lights, button batteries and electrical wire or copper tape to adhere lights to our projects. Our first project was a vest we made for our local garbage bash fest. The second was glasses that we made from card board then attached led lights to the corner.  We used recyclables for the glasses and the vest.  The clouds were made from the bubble wrap. The vest was constructed with the maker sewing machine.  The glasses were cardboard and popsicle sticks.

october-2016-457  We even made a throw switch!  watch here!  We used a simple arduino to make it look like rain.  This has been some of the best makers we have done so far.  And the most fun too. 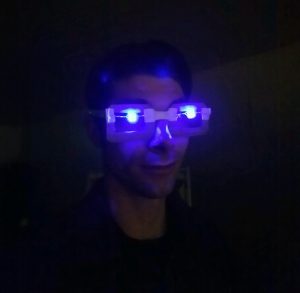 I am a librarian living in Victor, Idaho. Although I grew up in Bend, Oregon. Most of the time I am doing my best to keep warm. I come from a family of "nerds" and we love it that way. I have a degree in History and Education. I'm excited to keep learning and help others grow.