This continues the post about Great Things Going On in Idaho Libraries! Added a bonus and I’m still hoping to get to 100!

6) Making space for teens! I forgot to mention the massive expansion projects that are going on at all the Kootenai Shoshone Area Libraries (KSAL) branches under “bigger, better libraries” last posting, but it provided an opportunity to list it separately because every branch is adding a new teen space to their building. Rathdrum Branch Manager Sandy Burnett said teen spaces just weren’t part of most library plans 18 years ago when the district constructed many of the branches. But those same libraries are seeing more and more teens coming through the doors every day. Libraries in Post Falls, Sandpoint, and Boise and others are also looking at ways they can either build or plan teen areas in their existing spaces that better meet the needs of teen customers.

7) Keeping up with the times. Bear Lake County District Library Director (and newest SPLAT member!) Mary Nate has been implementing the “23 Things”  (see http://plcmcl2-things.blogspot.com/) based on Public Library of Charlotte & Mecklenburg County Learning 2.0 model. Mary even had the library board spring for free MP3 players for everyone who completed the 23 things. Mary says the biggest challenge is keeping one step ahead of her staff. She has also been a leader in implementing the “e-branch in a box” project, e-audio books and more. It’s great to see how different libraries are working to learn new technology and implement new services. 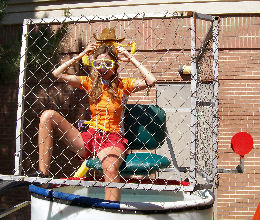 Jillian in the dunk tank8) Looking a little ridiculous for a good cause. Jillian Subach, Meridian District Library Youth Services Department Head, braved the dunk tank in honor of over 21,000 hours of reading. She’s also eaten a worm and done other crazy stunts that are all in good fun and show the kids that librarians aren’t always as serious as they think we are!

10) Cheers to sharing. Thirty-four Idaho public libraries will be getting storybook costumes to help draw in crowds during Idaho Family Reading Week in November. All that could are sharing with at least one other public library, doubling the number of library events that will be held this year (and saving costs too). They are also sharing ideas about what they are doing through The Scoop and in regional meetings.

11) Being willing to try and try again. When Garden Valley District Library’s bond election failed by only a handful of votes a few months ago, it was a tough loss. They didn’t let it get them down for long. They rallied their community and passed their bond this month — 317 for and 127 against — for a 71.4% approval!