If you’ve been around kids at all in the past ten years, you’ve undoubtably heard of the Japanese juggernaut known as Pokémon. Even ten years after it first hit state-side, kids are still clamoring to collect, trade and battle the virtual monsters. The latest incarnation of the series, Pokémon Diamond and Pearl, have already sold over 8.76 million copies worldwide.

With just a small investment of time (and possibly money), you can leverage this portable video game franchise at your library. Just advertise an hour (or more) each week when kids can bring their portable game systems to the library to battle and trade each other. It really doesn’t take any more than that to attract a regular following of Pokémaniacs who will come to the library week after week. 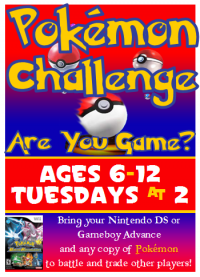 However, if you want to "evolve" your program to a new level, consider these extras:

So what’s stopping you from tapping the Pokécraze that’s been captivating kids everywhere? By doing so, you can push other library offerings (like Pokémon books, videos or music) at the same time. But, best of all, kids will continue to think of your library as an awesome place to play with their peers, further forging a lifelong love of libraries.